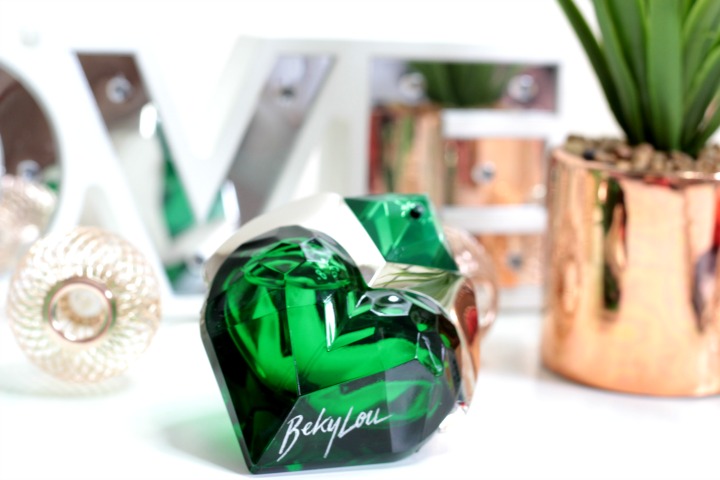 25 years since the first Mugler fragrance Angel launched, the teams behind the iconic scents are releasing a new addition to the Mugler family. Aura is the latest addition to the ever expanding range  and with Clarins Fragrance group being behind the scent once again, there’s no doubt that it’s going to be amazing. Angel and Alien have been two of the best selling fragrances in the UK for women for many years now and with so much love and almost a cult following around the fragrances I was excited to see what this new scent Aura had to offer to the fans.

When creating this scent Mugler wanted to create it as if it was his first fragrance; he loves the idea of how women are intuitive and sees our strength, magic and aura as our powerful instincts and wanted to embody that within a new scent. He believes that the new Mugler perfume Aura is just that.

Made with three ‘hearts’ Aura is a unique fragrance with ingredients never been used before in the perfume industry. The first, Tiger Liana, is rich, sharp and smokey with scents of sugared almonds; it was originally used in Chinese medicine for heart disease and to balance Ying and Yang but before now had never been used within fragrance. This is Mugler’s oriental heart of instinct which is ‘sensual and exquisite’ and the most addictive note within Aura. The second ‘heart’ is the Botanical Heart made up of Orange Blossom and Rhubarb Leaf and is the one that I think stands out the most for me and my naïve nose. I’m obsessed with what the orange blossom quite clearly brings to the table with this and combined with the other notes it works perfectly to create such a unique and powerful scent. Last but not least the third ‘heart’ of Aura is the Carnal Heart with Bourbon Vanilla and Wolfwood (which again is an ingredient that has never been used in fragrance before); for me the vanilla stands out and entwined with the orange blossom makes this fragrance one that smells so different yet so familiar to me.

It’s always incredibly difficult to describe a scent and honestly that’s why I don’t often post about them on my blog, but with this one set to be another iconic release from Mugler (and one that I have almost quite literally fallen in love with), I couldn’t help but share my thoughts on it. To me, it’s a very prominent scent – one that needs little encouragement or use of product to make itself known. It sinks into the skin effortlessly within half an hour or so to create a unique blend with your natural scent. Think of it like a foundation oxidising; exposed to your skin this fragrance dances with your scent to create something so beautiful – it’s extremely difficult to describe. As a stand alone fragrance this smells incredible in it’s own right and is definitely not like anything I’ve smelt before or even seen on the fragrance market. It’s become an obsession of mine that I absolutely love wearing and I can see it becoming very popular once it has been launched.

The packaging for this fragrance is also something I wanted to touch on; with Mugler’s past scents both being so iconic in their design, the reveal of the bottle for this new addition was obviously highly anticipated from all of us at the event. The beautiful heart shaped bottle was chiselled in glass by an artist after being proposed by Mugler himself and is encased in an ‘M’. He sees it as the epitome of simplicity and I couldn’t agree more. In keeping with the Mugler tradition, this bottle is also available in a re-fillable size. Since 1992, Mugler fragrances have been re-fillable in keeping with their dedication to a modern ecological culture and responsible development. I love this about the brand and think it’s something that a lot more companies should be doing to minimise waste in packaging.

Overall I think this is a scent that every woman should try, it’s animalistic yet feminine and has some amazing notes that make it so unique; unlike anything I’ve had the pleasure of smelling before. It’s poignent yet subtle in a well-balanced mix and one that I think will definitely be a scent that is easily recognisable in months or years to come.

What are your thoughts on the Mugler scents? Will you be heading to your nearest shop to try the new Aura fragrance?

Aura will be available as of this Friday 30th June and will be priced as below.