This year for me has been all about bettering myself and becoming a better version of Beky, a version of me that feels fitter and healthier and all together more human than the slob I was becoming towards the end of last year. If you’ve read my recent post ‘Kicking the Bad Lifestyle Habits’ you’ll know that since Christmas I’ve been doing so much to keep up and moving and to start eating healthier and I think I’ve made quite the difference already. One thing that I’d never tried before has been nutritional supplements. Honestly, I’d never really been a massive enthusiast before and so I’d never looked more in-depth at them thinking that they were a massive gimmicky scam and a huge waist of money. That was until I started noticing little differences in my weight loss and with toning my body; after seeing a couple of posts on Instagram by Vicky Pattisson (of Geordie Shore fame) I became more and more curious about the products that she was talking about. After a little digging I realised that the products she was promoting were actually part of her own range, ‘Mini:V Nutrition’ and I became even more intrigued. If you know anything about Vicky it’s that she’s recently undertaken a massive transformation in her shape and size and has done an amazing job of toning up and becoming a slimmer and healthier version of herself. I’ve loved her for a while anyway (being the main reason that I watched Geordie Shore) and so seeing her transformation and striving for similar results myself I knew I had to at least give these products a try. 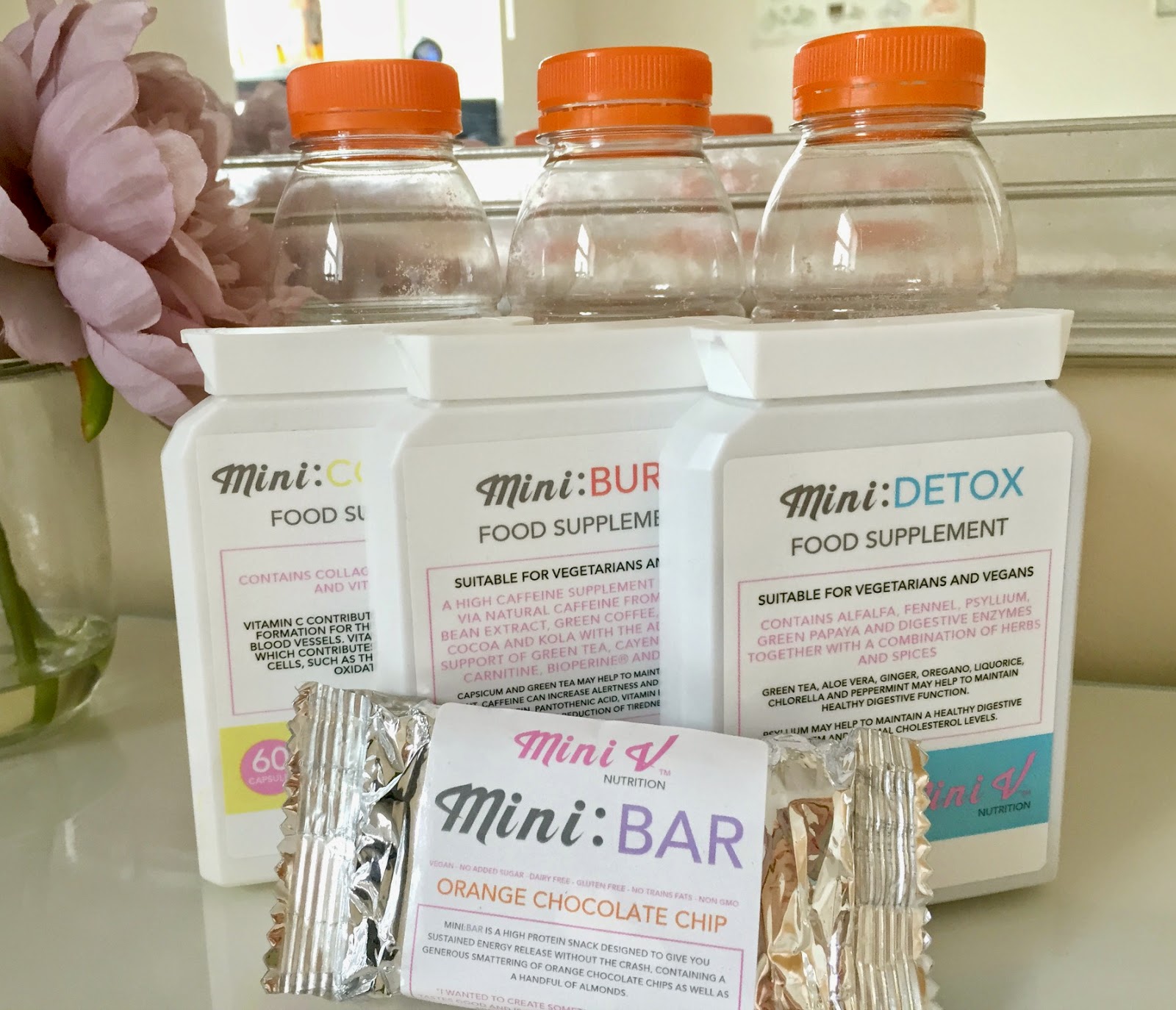 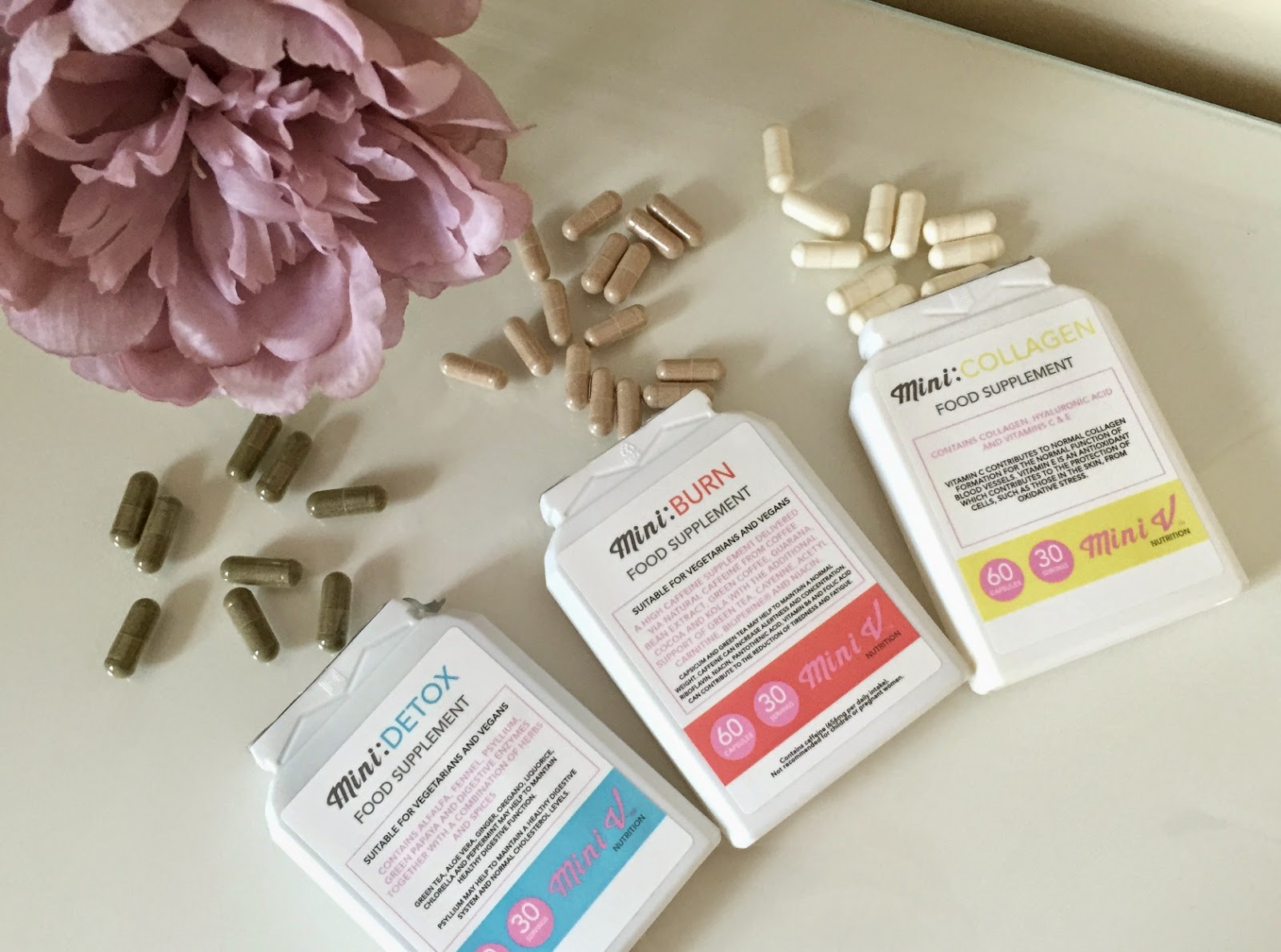 ‘For the Girls that like to party’, the Mini:Detox capsules are designed to help flush out all of the toxins in your body and to help support the bodies natural detoxification process. They supposedly help the body rejuvenate and ensure that your working in-tune, getting rid of all the unwanted ‘badies’ within your system. I try not to drink anyway, I really don’t like the way that alcohol makes me feel or act and so more recently I’ve been trying to stay away from it and stay sober (not that I was ever addicted) but it’s been more of a lifestyle choice and although I will occasionally drink,  I feel like it’s just not for me anymore. Regardless of the fact that I try not to drink anyway, I have been feeling much better when I wake up after taking these of a night time before bed, I wake up feeling more refreshed and ready for the day, which I usually do struggle with. I think for the drinkers out there, these would be perfect, but for us non-drinkers, they make a noticeable difference too and that’s brilliant in a product like this!

If there’s one thing that I’d say I’ve noticed the most by using these Mini:Collagen capsules, it’s that my nails have never looked better! Mini:Collagen is designed to maintain the elasticity of skin and also enhance the health of your hair and nails. My nails split and chip naturally all of the time and since I’ve been taking these capsules I’ve noticed a huge improvement in them, they’ve repaired , grown out and haven’t split in the last month. I have absolutely loved these capsules and think I’ll definitely keep taking these when the current pack I’m using finishes. Anything that is a nail saver is a big ‘yes’ in my books!

Mini:Burn capsules are a food supplement capsule designed to enhance your fitness routine by speeding up your metabolism and burning more calories. They are high in natural caffeine which did initially scare me as I have had bad reactions to caffeine in the past (I actually don’t drink Coca Cola and Coffee as the caffeine levels make me super hyper) but I thought these capsules consumed with lots of water could have worked. As directed, on days where I’m wasn’t going to be doing a workout / a heavy workout, I took one in the morning and then one around 6 hours later. On days where I was going to be working out (bootcamp, personal training sessions or a run) I took them both about half an hour before I work out as suggested on the Mini:V website. I definitely felt like they gave me such a boost of energy for my exercise initially (and it was definitely noted in the amount of sweat I produced) but I think for me, the caffeine in these was just too much. I’m really not used to having any caffeine in my body, let alone enough to make me sweat! I often felt quite sick midway through my exercise and started lagging a little with my energy levels. I also noticed some incredible headaches if I left it more than 24 hours since last taking the capsules, which is also another side effect I usually get if I consume caffeine. Since using these capsules I’ve noticed slight differences in my body that I didn’t notice before, but I think that for me, my body just can’t cope with the caffeine in these capsules and unfortunately I won’t be able to take them anymore. From having issues with caffeine anyway, I was kind of prepared for a reaction like this, but I do think that If you’re an avid coffee / Coca Cola drinker, you may find that these work for you.  I’ve seen lots of people online have great results from these capsules, so I do think they’re worth a go if you know you can deal with high doses of caffeine, but unfortunately for me, these just aren’t worth the side affects that I get. Which Sucks! Especially since I do think they would work great If I’d taken them for longer, I mean I was already seeing some results after the short two week period I had taken them! Make sure that If you do give these a go that you’re exercising along side – you won’t notice  as much of a difference if you’re not putting in the hard work too! 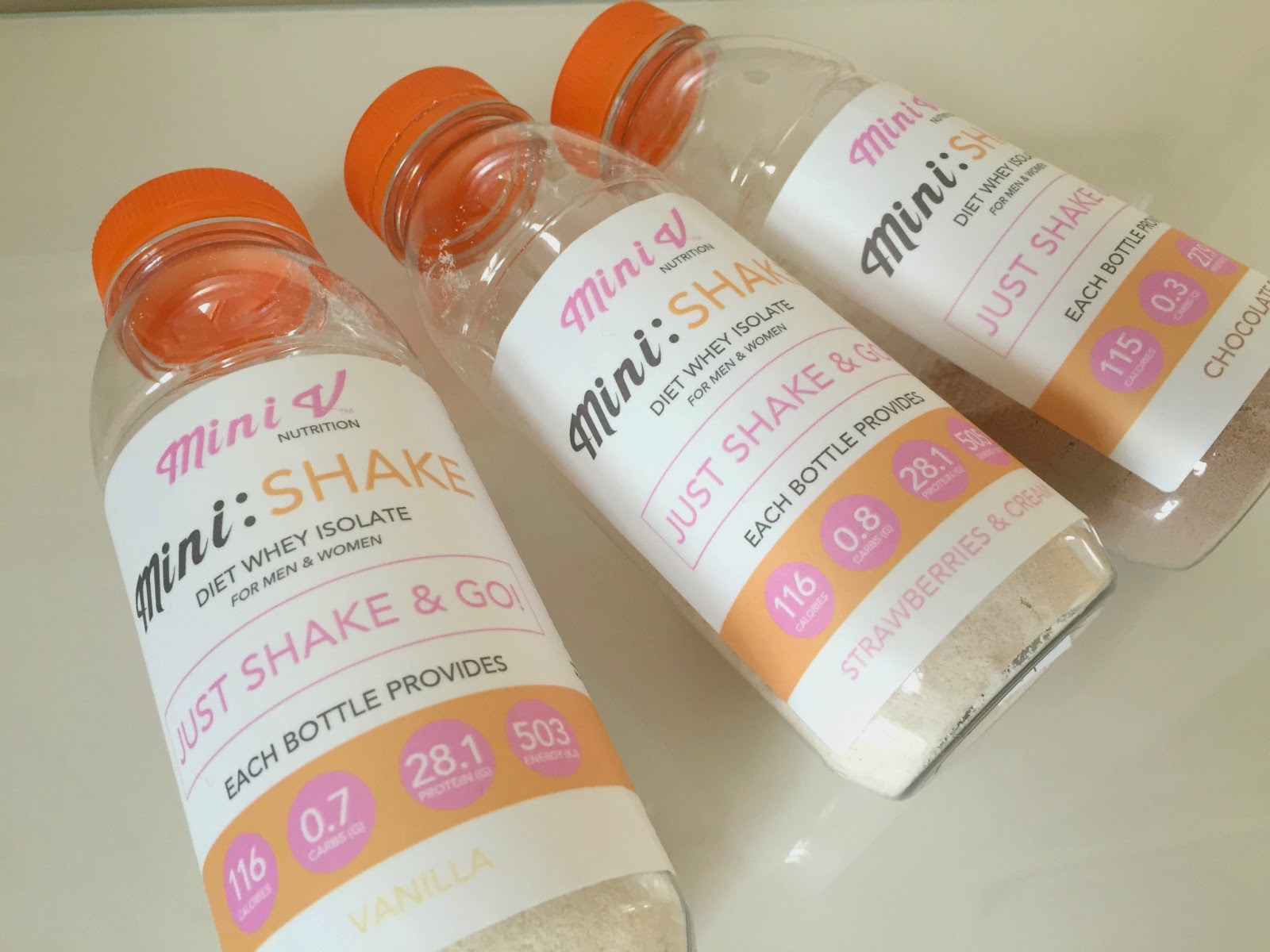 I’ve tried protein shakes a couple of times before, but have never really gotten into them, all of the ones that I have tried have generally been absolutely disgusting and so I’ve pretty much stayed away from them since. They’re also such a hassle, having to scoop out the mixture and make up shakes in my bottle before I hit the gym – I haven’t got time for that, I want to wake up and go! Mini:Shakes by Vicky are pre-measured protein shake powder in a plastic bottle ready for you to add water, shake and go. A little sceptical to try them due to my past with flavoured protein powders, I was totally surprised when they were absolutely delicious! I was generously sent all three flavours to try (Vanilla Creme, Strawberries and Cream and Chocolate Silk) and I have to say that Vanilla Creme has got to be my favourite, it’s so delicious that I was actually disappointed when I’d finished it after a recent kettle bell work. I felt so perked-up after drinking these and will most definitely be ordering some more! You can buy these individually or in packs of 3, 5 or 12. Alternatively you can also buy a 2kg tub of Whey protein in Strawberry, Mint Chocolate or Coconut for £44.99!

I was also sent the Mini:Bar  which sadly, my boyfriend gobbled up before I’d had a chance to taste it (he’s terrible, I can literally not leave him alone with anything food wise for more than a second!) Although a little dry, he did say that it was very tasty and that the original Orange Chocolate Chip flavour was a nice change to his usual protein bars. Even though it’s quite a small bar, it filled him up and curbed his cravings for other sweet things – definitely the aim of the game here! Mini:Bar is a high protein yet healthy snack designed to stop your naughty cravings in between meals. With no added sugars, trans-fats or gluten and dairy, it’s one for the chocolate lovers that want to stay on the healthy path!

I’ve been really impressed with Mini:V Nutrition and would recommend it to anyone that wants to improve their overall health, I wouldn’t necessarily recommend it to people that are wanting to use it for a short period of time to help enhance their metabolism as I think for lasting results, you’ll need to continue using this. I think with these types of supplements there is a risk of putting weight back on when you stop using them and so I wouldn’t expect results to last if you only take these for a month, but for those of you that want to try these for a longer period of time, I’d really say get stuck in! Just be wary of the caffeine side affects if you don’t usually have caffeine in your diet like me! You can buy a multi pack of Mini:Burn or all three supplement capsules for a discounted price of £49.99 instead of £74.97, which is great if you’re wanting to continue this for a longer period of time or try all three supplements at once like I have! I’ve loved seeing the subtle improvements that these have started to make towards my body goals and will be looking into buying more shakes for sure!

Have you ever tried any Nutritional Supplements or any from Vicky’s range?