As far as emails go, I have to say I received the best on by far this morning. Would I like to go to the European Film Premiere of ‘Divergent’? Well, there’s quite clearly only one answer to that. YES, please!
The lovely people working with Harper Collins as this book phenomenon is transferred onto the big screen have been generous to also give me 2 tickets to giveaway to you lovely lot that follow my blog! 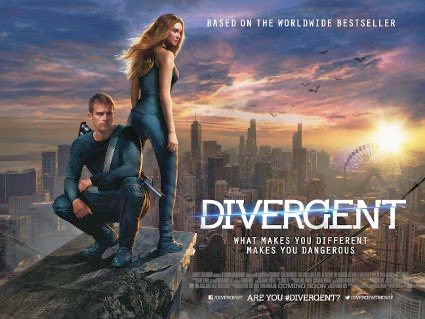 On Saturday March 29th and Sunday March 30th Leicester Square will be transformed into the dystopian world of DIVERGENT, where fans will be invited to undergo initiation tests and, like Tris Prior, choose where they belong. Would you survive in Dauntless? Fans will be put through their paces with Dauntless training to see if you are brave enough to join their faction!

But that’s not all – I have 2 tickets for the European premiere of DIVERGENT at Odeon Leicester Square on Sunday 30th at 1.30pm, attended by stars of the film Shailene Woodley, Theo James and Kate Winslet! So not only can you discover the world for yourself, you can walk the red carpet, mingle with the stars and watch the film before it’s released in the UK!

Enter the Rafflecopter giveaway widget below for your chance to win this once in a lifetime experience! And if you don’t win, don’t worry! Get down to Leicester Square early as they will also be giving out a limited number of premiere tickets to fans on both days!

There will be 1 winner! 2 tickets for you and a friend!


Rules:
You must be able to get to the Leicester Square Odeon on Sunday 30th March (this Sunday)
You must complete all mandatory entries.